Posted on December 14, 2019 by revkennydickson

For those who imagine what would have happened if the SS monsters chasing The Von Trapp family in The Sound of Music had captured them in the Abbey’s graveyard, Terrence Malick’s latest virtuosic film, A Hidden Life offers a possible answer, if Captain Von Trapp had stuck to his convictions.

Winner of the Ecumenical Jury Award at the Cannes Film Festival, A Hidden Life is based on the true story of Franz Jäggerstätter, (August Diehl) an Austrian farmer, WWII conscientious objector, and Christian martyr. After receiving mandated military training, Jäggerstätter refused to swear an oath of allegiance to Adolph Hitler, as was required of everyone serving in the German Armed forces. Though he offered to serve the nation that absorbed his homeland as a non-combatant medic, to the German High Command he was a traitor because he refused to pledge loyalty, not to a nation, but to the leader of that nation. 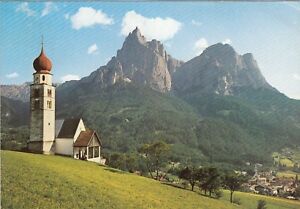 Although filmed in the Dolomite Mountains of Italy, A Hidden Life depicts the lush pastoral countryside and village of St. Radegund Austria, the home of Franz, his wife Franziska (Valarie Pachner) and his young daughters. Malick does not let any of the indescribable beauty of the Alps go to waste. Cinematographer Jörg Widmer captures the area in such a way that the viewer has the sense they are at one with the landscape and therefore experience a greater connection to the story and film. With but a bit of imagination, the viewer feels both the flowing beauty and peace of the setting.

The viewer might also experience the simple, communal, and peaceful life of St. Radegund as presented at the beginning of the film.  Initially, the community was close nit as families cared for and worked with one another to make a life together and help supply food and dairy products for the nation. This bucolic life and sense of community, however, falls victim to the Anschluss of Austria into Germany on March 12th, 1938 and the beginning of World War II. 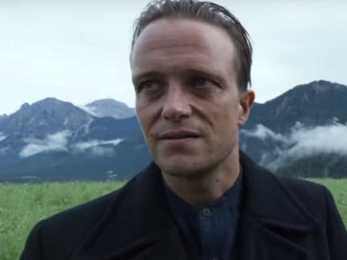 As he did with the scenery, the director also focuses on the characters. In contrast to the vastness of the pastures and mountains, Malick frequently photographs the individuals in tight shots, seemingly violating personal space boundaries. Such intimacy in shot selection symbolizes the personal nature and effects of the characters’ decisions and actions. The technique also pulls the viewer further into the narrative, making them more of a witness than a distant, disconnected observer.

As his village experiences and gives into the first winds of war, Franz seeks to stand against the gale. After first opposing the annexation of his country, Franz then opposes the brutality German fascism inflicted upon the Jewish population in Austria and others who were designated “different.” As the majority of St. Radegund favored the annexation of their country and village into Germany, Franz also opposes the marginalization and antipathy of life-long friends against him, his wife, and even his children. Lastly, Franz Jäggerstätter has to decide whether to maintain his beliefs or surrender to pleas and even taunts from others for him to go against his beliefs and swear an oath to Hitler.

While he consults the village priest, for whom he served as an assistant in the village’s church, as well as the area Bishop, Franz has to decide for himself whether he will 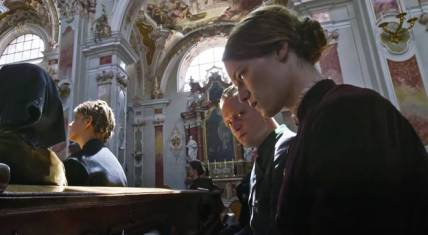 adhere to his belief, or declare, if only in words, the allegiance. For Franz, this decision amounts to whether he will remain righteous or oppose God’s desire for him. Despite all he has to lose, and the impact of his decision upon his family, Franz decides righteousness and responsibility to God surpasses all other calls and responsibilities in life.

In the twelfth chapter of the Gospel of John, Jesus enters Jerusalem. Very soon after he entered the capital city on what is now celebrated as Palm Sunday, Jesus received word from two of his disciples that there were some Greeks who wanted to meet him. As with many others in the city, they heard that Jesus had raised Lazarus from his grave four days after he had died and been buried (Ch. 11.) Upon hearing this request, and perhaps within earshot of the others wanting to meet the One who could restore life to the dead, Jesus spoke about his future as well as the future and expectation for those who would follow Him:  25 Those who love their life lose it, and those who hate their life in this world will keep it for eternal life. 26 Whoever serves me must follow me, and where I am, there will my servant be also. Whoever serves me, the Father will honor.

For most people watching the A Hidden Life, this teaching of Jesus calls them to give up comforts, habits or fears that keep them from living a righteous life of faith in Jesus rather than the perceived protection and comfort of worldly power and authority.  Although there are people today for whom this passage is a matter of life and death, for most viewing the film it is a matter of Dietrich Bonhoeffer’s teaching to die to oneself, by putting to death personal desires and distractions that lead one away from God.

Franz Jäggerstätter took John 12:25-26 and other teaching and life examples of Jesus and early followers with most seriousness as he believed that to swear an oath, if only in word, to Adolph Hitler was to join the Peter by the campfire when the Apostle denied his Lord. For Franz, the issue was less about losing his salvation than about betraying his creator and redeemer. Though he became known for his struggle and sacrifice, the title of the film acknowledges Franz was not alone in his decision. Through the centuries there have been many hidden lives that chose righteousness over life in this world. 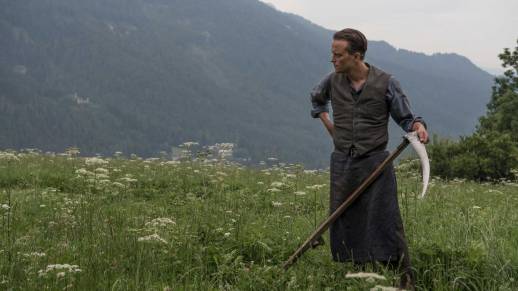 Throughout the film, Franz resisted offering judgment against those who had given their loyalty to Hitler. It was a personal matter and decision.  For Franz, his resistance mattered because he believed it mattered. In his heart, he believed that to offer his loyalty to Hitler was to take it from Jesus. If others did not agree with his belief, Franz withheld judgment. This refusal to judge others extended beyond the screen and into the theater. It is difficult to imagine anyone could watch the film without asking, “What would I do?”  As the viewer asks and considers this question while watching Franz wrestle with his dilemma, one senses Franz would call the viewer not to do what he is doing, but to do what the viewer, after intentional discernment, believes God desires them to do.

While the film may not judge those who believe righteousness would not prevent them from offering a hollow, disingenuous allegiance to worldly leaders and then work to serve their God in others ways, one does feel the film offers judgment against those who do what they know is wrong for convenience or safety’s sake.

As A Hidden Life is released in a time when there is much discord and challenges for citizens and leaders to consider their beliefs and actions in accordance with cherished principles and laws, the actions of Franz Jäggerstätter challenge and call individuals and nations to genuinely consider what is righteous and then hold fast to their discernment and conscience.

Although he has a devoted following, Terrence Malick is not every film lover’s cup of tea. As much as any working director, viewers either take or leave Malick’s films, and A Hidden Life, will prove to be no exception. Whether it is the challenging nature of the story or the slowly evolving, three-plus hours length, there will be many for whom this bell will not toll. But for those who appreciate or savor deeply personal storytelling, superb Oscar-worthy acting, and unsurpassable cinematic beauty, A Hidden Life is not a film to miss.

I am a United Methodist minister and my professional passion is connecting issues of life and faith to film and other artforms. I am also interested in autism awareness and ministry and special needs. I am married to Michelle and have two children.
View all posts by revkennydickson →
This entry was posted in Faith Shots, Film Shots and tagged A Hidden Life, August Diehl, Dietrich Bonhoeffer, faith, faith and film, Franz Jaggenstatter, Oscar Award, Terrence Malik, the Gospel of John, The Sound of Music, Valarie Pachner, World War 2. Bookmark the permalink.