Won’t You See, Won’t You Be My Neighbor, Please?

Posted on July 4, 2018 by revkennydickson

I hate that I was late in seeing Won’t You Be My Neighbor.  I hate when life intrudes on my movie “to see list,” but better late than never.  I have one thing to say to anyone who has not seen the latest film by Academy Award-winning documentarian Morgan Neville, go out and see this film.

I was a bit old for watching Mr. Roger’s Neighborhood.   By the time it was available on PBS I was on to other programs, but I grew to respect Rev. Rogers later in life.  Of course, as an adult and pastor who appreciates someone who loves and genuinely cares for children and their healthy development, I am grateful for all the lives Fred Rogers impacted.

From the film critic point of view, Won’t You Be My Neighbor is an engaging and entertaining film that offers something to those very familiar and those unfamiliar with Mr. Rogers and his program. As a documentary film, it provides both a 30,000-foot view as well as an intimate portrait into the life of Fred Rogers and those in his personal and production family.  The film has entertaining interviews with family and others connected to the program, thus offering insight into the man and his message.  As with any film that addresses periods in time, one cannot help compare eras. Produced in the last year (2017-2018),

Won’t You Be My Neighbor offers a contrasting voice and message to what fills the air today. The film is not obvious in pointing out the differences; it doesn’t have to be.  There was an audible murmur when they showed tape from the first week of the program in 1968.  The video showed the puppet character King Friday the XIII fearing the “Changers” and requiring reluctant subjects to build a wall to keep out people who wanted to bring change to his Kingdom.  The clip ended with the human Lady Aberlin sending balloons with “signs” calling for peace and acceptance of others over the wall to the King. 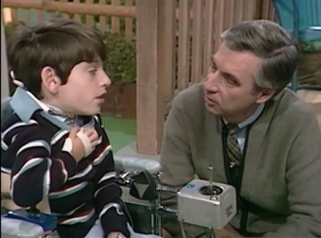 Even though Fred Rogers was an ordained Presbyterian minister, he never mentioned it on the air and rarely in public. Rather than talking about credentials and ministry, Fred presented the face of Christ to children and families throughout the country and ages.

Mr.Rogers’s genuine love of children led him to take time to be with and listen to children as he offered them a non-anxious, calming presence. He respected children, and he fearlessly addressed topics that all others avoided.

When RFK was assassinated in 1968, Mr. Rogers addressed the issue, explaining what assassination was and the fear and sadness that the nation was feeling. Fred understood children would know something had happened and wonder why parents and others were sad and scared. To avoid talking about the issue would only make the children’s fear more pronounced.  He loved children too much to allow this. Loving and engaging children like this are exactly what Jesus intended when he called for his disciples to allow children to come to him. 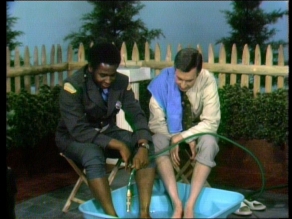 Fred Rogers also addresses the issue of race. A week after there were news reports and film of a hotel owner chasing African Americans out of the hotel pool by pouring bleach into the water to “clean” it, the neighborhood of Mr. Rogers saw him sharing a footbath with Officer Clemmons, portrayed by Francois Clemmons, an African American member of the cast. There was no mention of the hotel incident. there did not have to be.

As a part of one’s baptism, every disciple has a duty to present the person of Jesus to others. I cannot think of anyone who has reflected the face of Christ more genuinely than Fred Rogers. Because Won’t You Be My Neighbor models this call to all disciples of Jesus Christ, and indeed the call of all faiths to show God’s love to others, it is the most impactful faith film I have seen.

Beyond the realm of faith films, when considering  the struggle and brokenness so prevalent in our time,  Fred Rogers’s faith-driven desire to build or repair genuine community by caring and loving others,  Won’t You Be My Neighbor is one of the most important films in my memory

Won’t You Be My Neighbor is rated PG-13 and is available to stream on Amazon Prime, VUDU, and Apple TV

Based on a true story, A Beautiful Day in the Neighborhood depicts Mr. Rogers relationship with, and ministry to a Vanity Fair writer assigned to write an article on him. Tom Hanks as Mr. Rogers in the film which opens on November 22.

Like Won’t You Be My Neighbor, A Beautiful Day in the Neighborhood shows the impact of living the life and offering the love of Christ to others.

I am a United Methodist minister and my professional passion is connecting issues of life and faith to film and other artforms. I am also interested in autism awareness and ministry and special needs. I am married to Michelle and have two children.
View all posts by revkennydickson →
This entry was posted in Faith Shots, Film Shots and tagged christian teaching, face of christ, faith and film, Fred Rogers, Morgan Neville, Mr. Rogers Neighborhood, Won't you be my neighbor. Bookmark the permalink.

1 Response to Won’t You See, Won’t You Be My Neighbor, Please?