Posted on February 26, 2018 by revkennydickson 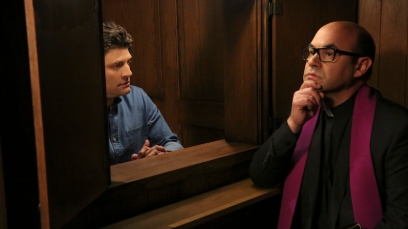 CBS and producer and writer Patrick Walsh have gone where angels fear to tread, producing a religious sitcom. No other subject matter is as open to criticism as religion. While there are enough persons of faith to support a show built around living one’s life Biblically, given the increasingly fractured and antagonistic nature of “the faith community” one has to thread an ultra-small needle with an ultra-thin thread in order to appeal to a healthy-sized audience. For many persons of faith, that narrowness is the difference between laughing with and laughing at faith and persons of faith.

In addition to the issue of the faith presentation tightrope, not too deep so as to be boring, not too simplistic so as to be vapid, there was for me the issue of being a film/television snob.  Too accessible and it is painted by numbers. Too subtle and it is, well, too subtle.

Not having read the Book, The Year of Living Biblically by A. J. Jacobs, I viewed the three-episode preview package of Living Biblically with no context of what kind of program it was.  Needless to say, I was a bit surprised, and initially put off when in the opening seconds it was evident that it was an overly, LOL, track driven situation comedy. (After mentioning the laugh-track was way too loud and noticeable for my taste, I was told the program used a live audience.  I can only imagine that a shocking device is connected to the Laugh sign that is flashed almost continually during the show.)  Aware of the real possibility, make that probability, of my theological and film critic double bias, I asked some others to preview the episodes on my laptop.

Their response was more generous than my initial reaction. These “civilians” also acknowledged the challenges of doing a sitcom about a “None” one of those who profess “none” when asked about religious preference. But, they came away with a favorable impression.  Yes, it is simplistic in many ways. Yes, there are the prerequisite stereotype jokes about faith and clergy, but it does have a place and voice to speak to those who have either drifted away or were never in a faith orbit. 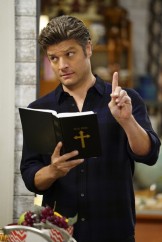 The program stars Dallas native Jay R. Ferguson (Mad Men) as Chip Curry, a film critic who experiences two life-changing events that led him to reconsider his life trajectory.  Chip decides he will attempt to live his life as prescribed by the Bible. To help him in this endeavor he develops relationships with a Roman Catholic Priest and a Jewish Rabbi, who meet regularly in a restaurant/bar for interfaith support.  This God-Squad helps guide Chip in applying ancient teachings and practices in a modern context.

As anyone who has attempted a significant lifestyle change knows, the change impacts others in the orbit of the individual.  In Chip’s case, it includes his non-believing wife as well as nominal or non-believing co-workers.  When anyone changes and begins living differently, the one who is changing, as well as the friends and family have to re-orient their relationship. Those who have done this know it is easier said than done. For the sake of retaining characters in the show, this aspect of adjusting their friendship, and making changes in their life, is portrayed much easier than it is in real life.

Based on the preview shows, it seems each episode will explore an issue of life and faith such as loving thy neighbor and the allure and challenge of modern idols, i.e., cell phones.  As with all TV, resolutions come much quicker and easier than real life. Crimes are rarely solved so fast, and trials are never completed in such a timely manner as they are on TV. So it is that theological awareness and discipline are rarely established and accepted so readily as they are on Living Biblically. But the show does address issues of life and faith that may be a first step for persons.

In an interview with producer and writer Patrick Walsh, (2 Broke Girls, and Crashing) I asked about his decision to make the show a situation comedy. Patrick believed, in spite the risks of being perceived as making fun of the Bible or faith, that comedy would be the best vehicle for allowing the ideas and concepts to be presented in a way that would be approachable to most viewers. He was appreciative when I told him of the reactions of those I had asked to view the episodes.  I also asked Patrick what type of character and narrative arc he envisioned in subsequent seasons. Did he see the show evolving as M*A*S* H and other situation comedies?  He responded that once the show is established, he believes the characters and storyline would change as both the characters and audience grow.

After watching the three preview episodes I was reminded of a sermon I heard Bishop Will Willimon, then Dean at Duke Chapel, preach when I was in seminary.  He was taking a road trip and stopped at a service station. The person working at the station found out that Willimon was a “preacher,” and asked if him if he knew the radio evangelist.  Willimon admitted to having some unflattering thoughts about that evangelist until the attendant said that the evangelist had changed his life. Because of that preacher, he was a better man, husband, and father. Dr. Willimon doubted he could have had a similar impact on the man.

Living Biblically may or may not be one’s cup of tea. But it likely will be someone’s first sip of thinking theologically that leads to something more substantial and filling.

I am a United Methodist minister and my professional passion is connecting issues of life and faith to film and other artforms. I am also interested in autism awareness and ministry and special needs. I am married to Michelle and have two children.
View all posts by revkennydickson →
This entry was posted in Faith Shots, Film Shots and tagged CBS, Duke Chapel, duke divinity school, faith, Jay R Ferguson, Living Biblically, Patrick Walsh, sitcom, the Bible, Will Willimon. Bookmark the permalink.