Posted on December 21, 2016 by revkennydickson

One can describe Collateral Beauty as a film that is powerful cubed.  It has powerful performances of a powerful subject that can have a powerful impact on viewers.  Collateral Beauty is a film about profound loss, pain, and the restorative power of love.  Viewers may have the temptation to skip the film so as not to be reminded of the pain that is a part of life. For some, it may take them back to a time and place of loss, or it may speak to those who, as of yet, have not experienced tragedy but realize and fear their vulnerability to being caught in its wake.  For those who have been through the tunnel that is tragedy and come out on the other side, the film offers reminders of the struggle as well as the reality that wholeness can be achieved even in the most broken of situations. For those still in the tunnel, the film offers hope that though not the same, a new life with joy and happiness is possible.

Will Smith stars as Howard, a founder, and CEO of a successful advertising firm who suffers perhaps the most feared and painful loss imaginable. Set three years following his loss, Howard is paralyzed by his mourning and is in danger of now losing his business. In the years since his loss, his only contribution to his firm is his spending days and weeks setting up elaborate domino designs which he then knocks over with but a push. Howard has stopped building and maintaining relationships in a business built on his talent and magnetism. While initially patient, clients are now moving on to other firms and the agency’ s only out is a buyout offered by a larger agency. 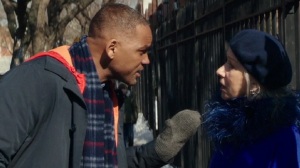 The only true connection to life Howard has is through his writing letters to those whom he believes are responsible for his pain, Love, Time, and Death. Howard’s friends and co-workers, Whit (Edward Norton,) Claire (Kate Winslet,) and Simon (Michael Pena) seek to reach Howard before it is too late by employing actors to personify these characters and connect with him so Howard can confront those whom he blames. The hope is that he will either snap out of his condition so he can close on the sale of his company or have him declared incompetent and be able to finish the buyout and avoid everyone losing everything.

After accepting the gig, Brigitte/Death (Helen Mirren,) Amy/Love (Keira Knightley,) and Raffi/Time (Jacob Latimor) read the letters Howard has written. After further debriefing from one of the friends, each approach Howard allowing him to confront them as well as hear from them about the full nature of the characters they are playing. As it turns out, Howard is not the only character who is experiencing trials of life. Because of some comedic moments and a broadening of focus, Collateral Beauty is not as intense, burdensome, or heavy as other films addressing loss. Will Smith’s 2006 The Pursuit of Happiness was much heavier and more difficult to watch.

In some ways, the film echoes Dickens’s A Christmas Carol by the presentation of the power of loss to change people and morph into anger which not only prohibits healing and becoming whole again, albeit with scars but also impacts and damages the lives of others.

Before the visitation of the three Christmas ghosts, Scrooge’s grief-fueled anger brought collateral damage to everyone with whom he had relationships or contact, as well as those he did not. While not expressing the bitterness and mean-spiritedness of Ebeneezer, Howard’s failure to move through his mourning and his becoming paralyzed in his life and relationships had collateral damage to those with whom he had personal and business

relationships. Howard’s preoccupation with the domino structures is symbolic of his life. With one action, an entire chain reaction of collateral destruction occurs. For Howard, this chain reaction following his loss is now taking down his business and impacting the lives of everyone in his life and business.

Reversing the concept of collateral damage, damage or destruction that is beyond the intended target, is the complex idea that the film’s title and story lift up in a direct and powerful way.

The idea that there can be beauty that comes out of loss and tragedy is central to Christian theology and experience of God.  The Apostle Paul teaches the Christians in Rome that in all things God works for good for those who love God, and that nothing in all creation, not even death, has more power than the power of God to love and for that love to be experienced. The collateral damage of humanity not trusting and turning away from God, as illustrated in the story of Adam and Eve, was that all creation was impacted and separated from God by sin.  The collateral beauty of that loss was the opportunity for God to demonstrate the unimaginable depth of God’s love for humanity and creation. The damage of the cross was the suffering and death of Jesus. The collateral beauty was the defeat of sin and mortality through the offering of forgiveness and reconciliation with God and life everlasting in God’s Kingdom.

As with almost every film, there are some things I would change in Collateral Beauty. However, it is a film that is worthy of viewing on both the level of entertainment as well as the message of hope and the power of love and life.

I am a United Methodist minister and my professional passion is connecting issues of life and faith to film and other artforms. I am also interested in autism awareness and ministry and special needs. I am married to Michelle and have two children.
View all posts by revkennydickson →
This entry was posted in Film Shots and tagged A Christmas Carol, Apostle Paul, Book of Romans, Christ, Collateral Beauty, collateral damage, Edward Norton, faith, faith and film, grief, Helen Mirren, hope, Kate Winslet, Keira Knightley, Michael Pena, recovery, religion, Scrooge, Will Smith. Bookmark the permalink.