Posted on November 24, 2016 by revkennydickson 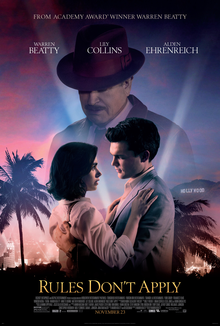 As an Academy Award-winning director (Reds), film actor and auteur, and since it has been 16 years since he made a film, a new film by Warren Beatty is important. Rules Don’t Apply is a good romantic comedy and dramatic film with solid writing and direction by Beatty. Also, there are outstanding performances by a strong cast, with the best-known members, Annette Bening, Martin Sheen, Matthew Broderick, Ed Harris, Oliver Platt, and Alec Baldwin, playing supporting or having cameo roles. In addition to the solid script, direction, and cast, Rules Don’t Apply, as other Beatty films is a multifaceted, nuanced film. Not only does it have layers of meaning supporting the comedic elements, but it presents Beatty’s world view in a semi-fictional, semi-biographical way.

While the first subject layer is the eccentricity of a legendary American industrialist and filmmaker, Howard Hughes, the second is the power the Church, Mainline Protestantism, had over much of American society through the first three-quarters of the Twentieth Century. Presented through the two starring characters who portray young employees of Mr. Hughes’s film company, starlet Marla Mabrey (Lily Collins) and driver Frank Forbes (Alden Ehrenreich), the film explores the place and impact of rules. Specifically, Beatty’s script connects the arbitrary rules Hughes had that strictly forbid fraternization between drivers and starlets, and the Church’s teaching and prohibition against sex outside of marriage.

Both Collins and Ehrenreich give impressive performances that range from vulnerable, wide-eyed young people who suddenly find themselves in the glamor, the hustle and bustle of Hollywood and working for Howard Hughes. Through the film, both characters change subtly as they experience firsthand the cost that comes with such glamor, and must decide whether they will pay it.

Surprisingly to some, the Church plays an important part in the first half of the film. As a Southern Baptist, Marla Mabrey had grown up being taught that sex outside of marriage was sinful and, if not a ticket to hell, was certainly one of the early steps. Having grown up Methodist, Frank Forbes had a slightly more generous understanding that if one had sex before marriage, one was not necessarily going to hell, but one was, in the eyes of God, married to that person. Both the rules of Mr. Hughes and Marla’s and Frank’s reluctant adherence to their faith backgrounds served as a barrier to them acting on their attraction to one another and their developing a relationship.  The same also damaged if not prevented a relationship between Mabrey and Hughes.

A second storyline is the famous eccentricity of Mr. Hughes. While it is not necessary for viewers to know the history of Howard Hughes, some familiarity with his story and his eventual becoming a recluse, helps follow and appreciate the film which is set in the 1950’s and 1960’s. Throughout the film, Hughes’s emotional state seems to falter as he thinks bankers and others are out to take TWA away from him by accusing him of being of unsound mind. The more Hughes seeks to avoid communicating with them, and making himself vulnerable to being judged incompetent, the greater the suspicions about him and the demands that he appear in public grow.

Warren Beatty is believable as Howard Hughes even though he is considerably younger than Hughes was during the film’s setting. Back is Beatty’s energetic and disarming delivery that seems to speak through other characters and to each audience member.

Beatty’s script shows Hughes’s eccentricities growing through the film; however, there seems to be toward the end, an opening onto another path and life trajectory. Such a change, and perhaps salvation from being a recluse, appears to be possible through relationships that his suspicions and rules worked against. The ending of the film speaks to the redemptive and salvific power of relationships and comments that societal attempts to control behavior can do more harm when relationships are prevented or damaged than the perceived threat the rules are supposed to protect society or individuals from.

For more information regarding the film’s themes, theological implications, and Warren Beatty’s thoughts and motivations behind the making of the film, please see my interview with Mr. Beatty on this website.

I am a United Methodist minister and my professional passion is connecting issues of life and faith to film and other artforms. I am also interested in autism awareness and ministry and special needs. I am married to Michelle and have two children.
View all posts by revkennydickson →
This entry was posted in Film Shots and tagged Alden Ehrenreich, Annette Bening, Baptist church, church, faith and film, Howard Hughes, Lily Collins, Methodist church, Relationships, Rules Dont Apply, Warren Beatty. Bookmark the permalink.