Posted on January 12, 2020 by revkennydickson

From its earliest days, films have depicted people and the lives they live. December 28th 1895 is considered the birthday of cinema as Luis and Auguste Lumière first projected a moving image onto a screen, a train pulling into the station in La Ciotat France. The image was captured by the Lumieres when they placed their Cinématographe, a device that both recorded and projected images, next to the tracks and recorded a train pulling up to the platform. Since then, showing the lives of people, whether in documentary or dramatic form, has been the driving force behind Cinema.

In his film 1917, writer/director Sam Mendes takes the audience back in time as he shows people struggling through a horrendous place and time, the Western Front during World War 1.  1917 depicts two British infantrymen given a most dangerous mission, to work their way beyond the trenches through “no man’s land,” into and through territory the Germans had just evacuated yet was likely still populated by pockets of enemy soldiers, and deliver a message to save 1600 men from a German ambush. Although the story is about the two men on a dangerous mission, there is a third person on the journey, the viewer. Mendes’s goal in the film is to expose the audience to the experience of one of the most brutal and tragic events of the 20th Century, “The Great War.” 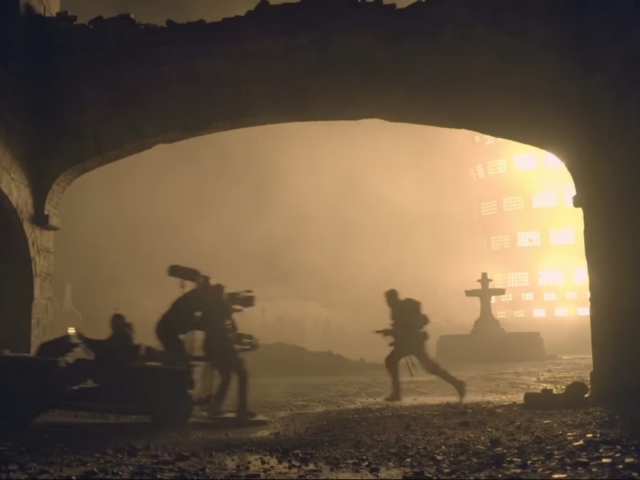 To increase the sense of the viewer’s being there, Mendes uses a series of very long, single-shot sequences that give the feeling that the film is taking place in real-time. Other directors have sought to make films to appear as one shot, but none have attempted it on such a grand scale. While the Lumière brothers set up their static camera on the La Ciotat train platform, Mendes snakes his camera through the trenches, battlefield, bombed-out farm, and war-torn city, showing the viewers where the war was fought and where soldiers and non-combatants lived and died.  Although the energy of the film is experienced in the combat sequences, Mendes offers glimpses into the other experiences of war, the downtime boredom, hunger, and human connections that arise when people of different lives, cultures, families, and nations are thrown together.

While Mendes is rightly receiving praise, and awards (Golden Globe Winner for Best Direction) much of the weight of the film rests on the shoulders of the two leading characters, Lance Corporal Blake (Dean-Charles Chapman) and Lance Corporal  Schofield (George MacKay.) Regardless of the technical wizardry, masterful sets, planning, and direction, the success of the film depends mostly on the ability of Chapman and Schofield to grab the audience’s attention and keep it for the entirety of the two-hour film. 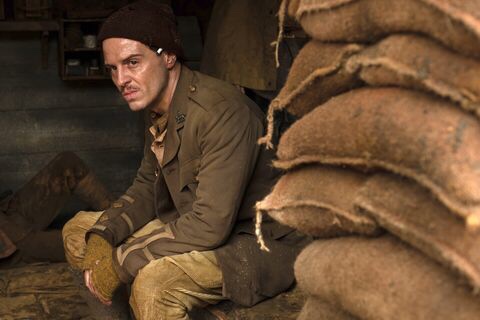 MacKay and Chapman deliver powerful performances conveying an array of emotions including cynicism forged in the fog of battle and the mistakes of command, courage amidst fear, tender generosity within utter brutality, and determination to fulfill the mission and keep a promise.  While both actors more than accomplish this, MacKay should be in conversations for best actor awards. Colin Firth (General Erinmore) and Benedict Cumberbatch (Col. Mackenzie) lead a large supporting cast, who given the fluid nature of the film, appear briefly in single scenes. Claire Duburcq, as the only woman in the cast, offers a touching performance as a young woman trapped by the fighting in what was once her home town.

Another masterful accomplishment in 1917 is the production design (Dennis Gassner) and staging. The moment Blake and Schofield go over the wall of the trench into no man’s land they enter a world as alien as another planet, and they take the viewers with them.  All around is death, whether it be the bomb craters, tangled, flesh-hungry barbed wire, human and equine corpses, or the foraging rats which, although alive, represent death.  Death also lingers beyond no man’s land, but it is mixed with the signs of life and nature that seem to mockingly remind the combatants and viewer of the goodness and beauty of life that used to flourish.

In addition to the visual feel, Thomas Newman’s beautifully haunting score effectively mirrors and enhances the drama and emotional peaks and valleys throughout the film. The inclusion of a soldier’s (Jos Slovick) mournful offering of “Wayfaring Stranger” prior to a battle articulates the feelings, fear, and place of those consigned to face the ultimate manifestation of human brokenness.

Viewers familiar with the war film genre will recognize elements of other war films. Echoing Paul in the World War 1 Film All Quiet on the Western Front, Schofield shares how the war has changed him and more importantly, his experience of home. There is also the tension of urban combat where the enemy could be around every turn and in every bombed-out window as shown in Full Metal Jacket and American Sniper among others. There are the surreal sensory experiences that accompany the transformation of a typical town into a monstrous battle jungle, and humanity into a beastly caricature depicted in Apocalypse Now.  From Saving Private Ryan there is going forward on a seemingly impossible mission as well as the intimate nature that can accompany the life and death struggle of hand to hand combat. The extended tracking shots also recall the film signature of Stanley Kubrick in his World War 1 masterpiece, Paths of Glory as well as the earlier mentioned Full Metal Jacket.

Given the intimacy and real-time presentation of 1917, the viewer feels perhaps the most difficult part of surviving combat, leaving behind those who fall. What is the most personal and solemn occasion in life is often hardly noticed on the battlefield. When death comes in wave after wave there is little, if any time to mourn the loss nor sanctify the place of the fallen. Combat does not allow for such luxuries as another fight seems always to be calling.

The film is dedicated to Alfred Mendes, Sam Mendes’s grandfather who served in the war as a Lance Corporal in the British Army. Unlike most veterans, he shared his stories and experiences with this family. Through the film, Mendes preserves the memory of this tragic conflagration, the suffering and sacrifice of combatants, family, and civilians. Perhaps it also calls viewers to give pause to the thought of war as a way to settle national and cultural disputes.

1917 is worthy of Best Picture consideration.

1917 calls persons of the Jewish and Christian faiths to truly consider the Ten Commandments, especially not killing, coveting, or worshipping false gods such as material wealth and worldly power. Additionally, the film challenges Christians to consider as authoritative the teaching, and command of Christ to love even one’s enemies and return love for insult and injury.

Although Jesus offered no exclusions to this teaching and His life example, too often His followers dismiss them as aspirational, something not possible in the “real” world. While it is easy to dismiss this teaching as unrealistic, what is then list is consideration of how following these central instructions could prevent escalation of social or political tension into combat.

There is no greater example of such escalation of conflict into combat into conflagration than the First World War. Of course the Armistice of 11/11/1918 was only a 21 year pause to the decimation that was Second World War. This escalation cycle continued through the Cold War and the proxy-wars that continue to this day.

1917 serves serves as a suggestion that, in the midst of the repeated failure of the ways of the “real” world, it might be time to give the Way of Christ a try.

I am a United Methodist minister and my professional passion is connecting issues of life and faith to film and other artforms. I am also interested in autism awareness and ministry and special needs. I am married to Michelle and have two children.
View all posts by revkennydickson →
This entry was posted in Film Shots and tagged 1917, discipleship, faith, faith and film, jesus, Sam Mendes. Bookmark the permalink.