Photos courtesy of A24 Films

Story telling has been at the heart of human communication since the development of language. Countless generations of people have gathered to share stories that entertain, inform, and offer insight into their condition.  One of the iconic story forms is the ghost story. Whether sitting around a campfire hoping to take advantage of one’s perceived vulnerability in sleeping outside amidst the chaos that comes out at night, or connecting with people in a darkened movie theater hoping to plant seeds in dreams to come, storytellers have long

talked of those who may or may not be forgotten and are not really gone.

Writer /director David Lowery (Pete’s Dragon) reaches back to this iconic story form in his latest film, A Ghost Story. Although the subject of the film is a ghost, A Ghost Story is not a horror film that lives off the rush and excitement fueled by graphic violence or helpless, clueless people putting themselves in harm’s way. Through the black, cutout eyes of a ghostly sheet, A Ghost Story is a film that examines life, love, loss, life amidst loss, and the perils of nostalgia.

A Ghost Story is also about time, the timeline covered in the film as well as the time Lowery takes in presenting the story. As with any well-crafted ghost story, the desired impact is achieved not just in the narrative, but in the setting and setup of the story.  Lowery’s desired impact for the viewer is not a chilling fright, but a contemplation of life, loss, and what we hold on to in life, and perhaps even beyond. While there is haunting, outside of a couple of scenes, it is the ghost who is haunted by people and memories rather than the people haunted by the ghost.

A Ghost Story has the feel of a mid-20th Century European film drama. As I watched the film I had the feeling I was watching an Ingmar Bergman examination of life and death, specifically, Wild Strawberries in which he examines life from the perspective of an older man, who is a ghost of his former, youthful self and life.  In an interview with David Lowery I asked him if he had been a fan or student of European cinema. Lowery said he

had studied the European masters as a youth and young adult and appreciated the minimalist approach to dramatic storytelling of Bergman and Federico Fellini and others.  As with the great European cinematic masters, Lowery uses shot selection, silence and the time afforded by extended scenes to allow the thoughts and experiences of the viewers to grow organically rather than presenting ideas to the viewers in prepackaged form through active dialogue and cinema-graphic busyness.

Like many things, an appreciation for the past, keeping memories alive in things can have its place, up to a point. When taken too far, nostalgia can have negative consequences. There is a difference between remembering the past and holding on to the past by hording memories and objects.

Remembering the past is reflecting upon those events, feelings, memories and relationships in the present and carrying them into the future. There is a point, however, when possessing memories moves into being possessed by the past. Clinging to the past inhibits one from going forward in the future, whether it is going forward to the next adventure, or stage in life, or moving on to a new life after suffering loss. Holding on to the past denies the hope, life, and healing the future holds.

Moving toward the future, accepting and embracing the unknown, is an act of faith. Holding on to the past is a faith-deficient act of fear. There is a scene following the death

when the Ghost, wearing the sheet that covered the body, begins wandering halls of the hospital. As the Ghost moves unnoticed past people in the hallways a portal of light appears on a wall. As the Ghost halts and lingers, the portal closes. Persons of faith are likely to interpret this as the opening to heaven and everlasting life.

As presented, the Ghost, in death as in life, has freedom of choice, to go forward or stay back. As in life, there are consequences for the choices made. For the Ghost, the consequence is remaining in the present, even as that present will soon turn into a future that will not include the Ghost who, must instead remain in a present that has lost all meaning. As hope is something of the future, a present with no future is a present with no hope.

The Ghost’s hesitation was reminiscent to the hesitation of Israel to take the land Yahweh had promised to provide. Even after Yahweh had led them out of slavery the Israelites were fearful of going forward. They chose to live by the perceptions before them, a strong nation they could not conquer, rather than the promises offered to them by God. This halting, fearful reaction to the challenge ahead reflected their doubt that Yahweh could provide and protect them, even as God had just led them out of their Egyptian bondage. In response to halting, Yahweh forced them to wander in the wilderness, still caring for them, until they had faith that God could provide as God promised. Part of the promise of this new land was the belief in Yahweh’s desire and ability to provide. Lacking faith in God’s desire or ability to faithfully provide, even this new land would be one without promise had God allowed them to enter. 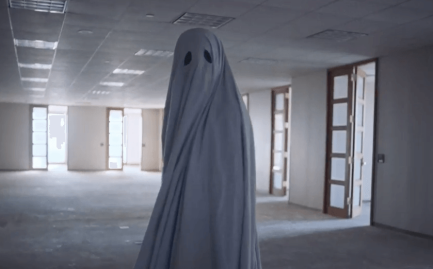 Part of living is experiencing the present and anticipating the future. Persons of faith live in the present, preparing for the future that God not only desires for them, but provides and accompanies them into, if they choose to live by faith and go rather than submit to fear and seek to remain behind.

The choice to present the Ghost as a sheet with blackened eyes not only plays off the iconic image of ghosts, it represents the condition of the deceased, or anyone, when life is ruled by fear rather than lived by faith.

The Apostle Paul teaches that persons of faith see God, even if only through veil, or a glass darkly. Upon death and entering God’s Kingdom the veil is removed and one views God fully, face to face. In not proceeding forward, the Ghost now sees and experiences present life as past life, only now it is seen as well through a veil, the veil of death as represented by the sheet.

What is true for persons of faith, the call and decision to live by faith for the future or reject it by holding fast to the past, also applies to churches and communities of faith. Persons and communities of faith are not called to reside in the comfort of the known and already experienced, rather they are called to go forth toward that which is promised and only seen dimly, trusting in God’s faithfulness to accompany and deliver them. To do otherwise is to stay under the veil and cease to truly live. The Gospel as presented in Scripture, and the film, is God is patient, kind, loving, gracious and willing to wait for one to act in their time, just as we are called and must live in God’s time.

Regarding the visual elements of cinema, A Ghost Story is a simple little film-the Ghost is under a sheet with black eyes, there are very few special effects, no haunting, nor shrieks nor even a large orchestral score.  When considering the story and themes, however, there is a deep reservoir of complex issues of life and living as well as life and death.  As such, some viewers who require continuous action or dialogue, steady plot movement, and desire not having to consider deeper issues of life may be put off by the pace, feel, and introspective nature of the film. Those viewers who do not require a film by the numbers experience and are open to introspection will savor this finely crafted film.

A Ghost Story is rated R and stars Casey Affleck and Rooney Mara.

Link to a discussion guide from Pop Theology on Patheos.com

I am a United Methodist minister and my professional passion is connecting issues of life and faith to film and other artforms. I am also interested in autism awareness and ministry and special needs. I am married to Michelle and have two children.
View all posts by revkennydickson →
This entry was posted in Faith Shots, Film Shots and tagged A Ghost Story, Casey Affleck, David Lowery, Death, Exodus, faith, faith and film, fear, Federico Fellini, Ingmar bergman, life, Petes Dragon, Rooney Mara, the Apostle Paul, The Israelites, The Promised Land, wild strawberries. Bookmark the permalink.