Posted on September 19, 2016 by revkennydickson

Clint Eastwood’s Sully is a compelling film recounting the January 2009 forced water landing of US Airways Flight 1549 after bird strikes knocked out both engines shortly after take-off from New York City’s La Guardia Airport.  While most Americans are familiar with the images of the plane landing and floating in the water, passengers standing on the wings awaiting rescue of by ferries and other boats, and the mild-mannered Captain Chesley “Sully” Sullenberger, (Tom Hanks) who engineered the unprecedented landing. It is what happened after the landing that is the subject of the film.

The film begins in the days following the incident as federal investigators attempt to determine if the water landing, miraculous as it was, was necessary. Did Captain Sullenberger heroically save all 155 souls on board, or did he needlessly endanger them by not trying to land at an airport? In the film, the passengers and crew had barely been able to dry off before there were reports that simulators had indicated the plane could have made it to LaGuardia or Teterboro airports.  Sully’s instincts, however, had told him he could not have made it.

As with most films about real events, some aspects of the water landing and the aftermath are altered so as to increase the drama to sustain a feature length film. The antagonism of the NTSB investigators seemed forced and stereotypical; so as to inject additional drama into what was already a dramatic story. 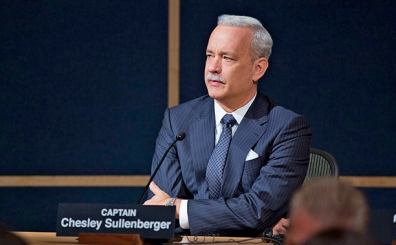 The process and findings of the investigation, though condensed in the film, were similar to the original inquiry. Also, the effect of the event on Sullenberger, though perhaps overly dramatic as presented in the film, does indicate the power of traumatic events even when they are short-lived and have positive outcomes.

While the action sequences surrounding the flight, landing, and rescue are gripping and flawlessly presented, Sully features the light, low-key directorial touch that has become an Eastwood trademark.  Eastwood’s noted relaxed approach to shooting lends to a tranquil feel in many of his films and such is the case for Sully. This understated aspect is appropriate for this film as it reflects the calm, controlled demeanor so often exhibited by pilots and air traffic control professionals.

In what is another masterful performance by one of Film’s most accomplished and versatile actors, Tom Hanks quickly disappears into the role of Sully Sullenberger. In playing someone so unassuming and so familiar with the audience, Hanks conveys the subtle complexity of the reserved Sully’s life during the time following the crash when he was being both hailed as a hero as well as investigated for endangering the 155 lives for which he was responsible. Cast into a limelight he does not desire, Sully does what he does best as a pilot, manages the situation, including his emotions and his reticence to accept the notoriety and moniker of hero.

Though the majority of the film focuses on the investigation of the landing and the impact on Sullenberger, it also details his 40 years of flying. After learning to fly as a teen, Sully does a stint in the Air Force and flies for US Airways for almost 35 years, delivering over a million passengers safely.

All of these experiences were called upon during the 200 plus seconds of flight 1549. While considered miraculous, the landing was anything but a miracle. It was instead the product of instinct, training, steady nerves, and decisive action.

That Sully was able to make decisive decisions under extreme stress and then marshal skills enough to accomplish what had never been done before, is indicative of the importance of training, instinct and preparedness. Only if Sully had been able to achieve the water landing without all of his training and experience would the events of January 15th, 2009 been miraculous.

While miracles are a part of faith, they are of God, not people. Preparations through spiritual disciplines establish and strengthen relationships between followers and God. Prayer, worship, the study of Scripture,  fellowship with, and service to, others are tools that foster spiritual growth and equip persons of faith with instinct and abilities to be able to respond when life forces one into powerless glides. Sully demonstrates that losing engines at less than 3000 feet is not the time to develop skills and instinct for deciding and executing a forced water landing. Likewise, waiting until a life crisis is not the best time to begin living by faith. One is best able to respond to challenges when one is already connected to and living by the hope and assurance one realizes and receives from God.

I am a United Methodist minister and my professional passion is connecting issues of life and faith to film and other artforms. I am also interested in autism awareness and ministry and special needs. I am married to Michelle and have two children.
View all posts by revkennydickson →
This entry was posted in Faith Shots, Film Shots, Scattershooting and tagged Clint Eastwood, faith, faith and film, prayer, Spiritual disciplines, sullenberger, sully, Tom Hanks, worship. Bookmark the permalink.