It is no secret that in recent years there has been an increase in the number of faith based and Biblically based feature films released. While the popularity and number of these films are historically cyclical, growing and fading in popularity, the most recent offerings are unique as they could be classified as a new subgenre, “Scriptural Fiction.”

Similar to historical fiction novels and films where fictional stories are imbedded into historical periods, Scriptural fiction films present fictional details within non-narrated accounts in Scripture. The intent is not to change scripture, as many contend, but to imagine details, developed through and consistent with other parts of Scripture, that allow viewers to think and enhance understanding or relationship to the Scriptural accounts and or persons.  Last Days in the Desert is the third film of 2016 to fill in gaps in the Gospels’ narrative of the life of Christ with a fictional storyline. Films of this type do not contend to re-present stories from the Bible, but using the Bible as a resource, imagine events that are not described in Scripture.

The Young Messiah imagined the story of Jesus growing into his divinity during the time when he and his parents lived as refugees in Egypt. RISEN examined the fictional story of a Roman soldier’s journey to faith as he searched for the presumed stolen body of the risen Jesus. Last Days in the Desert presents the final days of Jesus’s post baptismal, 40 day wilderness fast and time of temptation. Starring Ewan McGregor as both Jesus and Satan, Last Days presents a perspective of Jesus developed from screenwriter / director Rodrigo Garcia’s understanding of the teachings and life example of Jesus as presented in the Gospels.

In contrast to many previous depictions of Jesus on screen, Rodrigo’s conception and McGregor’s depiction of Jesus is earthy, intuitively wise but without full understanding, and kind but not campy. One feels an intimacy with this Jesus that has often been lacking in the grander, larger than life accounts so often depicted in the past. Much of this closeness comes through witnessing Jesus interact with a family he comes across as he is leaving the desert and with whom he spends time with and learns life lessons from.

The intimacy is also established as the viewer is privy to Jesus’s encounters with Satan. As with the presentation of Jesus, the film’s depiction of Satan differs from most film accounts. In Last Days, Satan is understated and psychological, more subtlety cunning than demonstratively evil.

Using McGregor for both parts correctly identifies and presents the truth that Satan’s power, temptation, lies within oneself rather than from outside physical forces. Last Day’s depiction of Satan echoes that in The Rolling Stone’s epic song, “Sympathy for the Devil.” Confusing Jesus is the nature of this tempter’s game. Through confusion and manipulation, McGregor’s Satan casts seeds of doubt into McGregor’s Jesus.

Though he has divine wisdom and intuition, Jesus does not have full understanding at this point in his life as he begins his ministry. It is in this lack of full understanding that Jesus has a commonality with Satan, who, in his criticism of the ways of Jesus’s Father, shows he does not understand such and, unlike Jesus, would not accept that which he didn’t understand. In Contrast, through his faithfulness to His Father’s desire, to offer grace and salvation through the incarnation, and His Father’s plan, the cross, Jesus grows in understanding which allows the human Jesus to grow closer to the father thus replicating their intimacy when Jesus was the Word prior to his incarnation.

Many viewers familiar with the Matthew and Luke accounts of the temptation by Satan will be expecting to see the three famous temptations of food, worldly power, and testing God; these, however, are not included. Rodrigo’s script follows the Markan Gospel that fails to specify the temptations. The decision not to include the three very familiar vignettes, allows, if not forces, the viewer to think more about the encounter and the subtle nature that is most often the genesis of temptation.

While superficially acknowledging the humanity and divinity of Jesus, the depiction of Jesus in most previous films has often been at an arm’s length, and effectively presented him as more of a superhuman than a fully human being who knows what it is to struggle, wonder, and question. Such a depiction creates distance that makes it harder for some to connect in ways that can be transformative.

By presenting Jesus as truly human, someone who has known our vulnerabilities, struggles, and lack of full understanding, Last Days in the Desert can appeal to persons within and outside the faith. This Jesus does not know all the answers, but he has faith in His Father to wait for revelation. Such faith is a challenge even the most faithful often struggle with. Last Days presentation of the fully human Jesus does not deny the divinity of Jesus, it instead provides a model of faith and discipleship that build and sustain hope for all of us who struggle with the challenges of life. 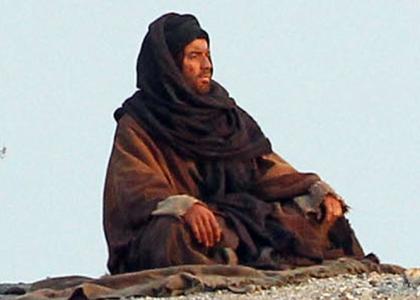 Set in the desert around Judea and filmed in the Anza-Borrego Desert State Park, one could describe the film’s look and feel as, in the words of Buzz Aldrin’s description of the moon, “beautiful, magnificent desolation.” Technically the film presents light touch direction from Rodrigo Garcia, top notch cinematography from three time consecutive Oscar winner (Gravity, Birdman, The Revenant) Emmanuel Lubezki, and compelling, understated performances from McGregor, Ciaran Hinds (Father), Tye Sheridan (Son), Ayelet Zurer (Mother). Last Days in the Desert is minimalist in terms of cast, action, and dialogue. It is a film of nuance and subtlety, and as such it might not appeal to all viewers. But, discerning viewers who are patient and follow where the film goes are richly rewarded.

Functionally Last Days in the Desert is what faith films, by their very name, should be.  It does not offer all the answers, but provides opportunities for questions and discussions and discernment which helps to establish, re-establish or strengthen one’s faith.

The film is rated PG-13 and is available for theater rental through tugg events.

I am a United Methodist minister and my professional passion is connecting issues of life and faith to film and other artforms. I am also interested in autism awareness and ministry and special needs. I am married to Michelle and have two children.
View all posts by revkennydickson →
This entry was posted in Faith Shots, Film Shots and tagged Ayelet Zurer, Ciaran Hinds, Emmanuel Lubezki, Ewan McGregor, Gospel of Mark, jesus, Jesus in wilderness, Last Days in the Desert, Rodrigo Garcia, Sympathy for the Devil, temptation, The Rolling Stones, Tye Sheridan. Bookmark the permalink.