“Son of God”: Script over Scripture

Speaking for their film “Son of God,” producers Roma Downy and Mark Burnett spoke about their desire to update the epic Biblical films of the 1950’s and 60’s to better fit with today’s audiences. With greater technological tools at their disposal, “Son of God” is sharper and crisper than the epic narratives of 50 years ago, but the experience and feeling watching the film is very similar. There is no doubt that “Son of God” has touched many of the millions of persons who have seen it, served as a conversation starter for families and individuals, and friends and led unchurched, or formerly churched viewers to reflect and consider or reconsider faith, all of which are good things.

Though positive, these benefits do not mean that the film offered a complete portrayal of Jesus or accurate presentation of the Gospels. As much as they wanted to update the portrayal of Christ from the presentations of the 1950’s and 60’s, outside of the filmmaking craft, “Son of God” retains much of the feel of the earlier epics where the divinity of Jesus overflows and overshadows the humanity of, and connection with, Jesus. With a weaker presentation of the fully human Jesus, will the responses of individuals to the film, especially the unchurched, lead to transformation or evaporate as the emotion of the moment fades?

At six feet, three inches and combined with his model appearance, Diogo Morgado stands out, literally heads and shoulders above everyone. This casting decision, as well as the directorial decision to repeatedly utilize sweeping helicopter shots of Jesus, and the post production decision to accompany such photography of Jesus with an equally grand musical score creates emotional and physical distance and lessens the intimacy between the viewer and Christ. Such distance is contrary to the intimate Jesus as presented in the Gospels. Intimacy by Jesus with the people, especially those cast out or devalued by the society of the time is one of the most important teachings of the Jesus in The Bible. The prologue to the Gospel of John describes a different Jesus to the overly dramatic Jesus depicted in “Son of God”, “And the Word became flesh and dwelled among us.” The translation of dwell is actually, “pitched his tent” among us. 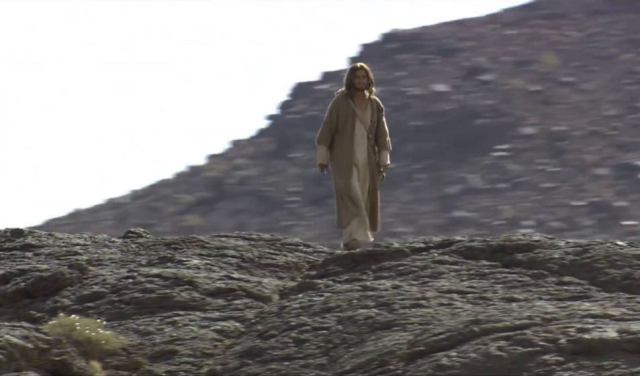 Jesus, the Word made flesh, did not live around us and like us; he lived among us, as us. To depict him in such a soft focus yet grand manner antagonizes the purpose of God’s incarnation and echoes the early church heresy of Docetism, where the humanity of Jesus was denied as he was described as spirit in human form. It is not necessary to depict Jesus as larger than life because as the Word, the creator of all things, Jesus is life. Grand presentations of Christ, while usually done as an effort to respect and honor of his divinity, are in contrast to the purpose of his life and ministry, and ironically echoes the first century misconception of what the Messiah, the Son of God, should look and be like, and was a major factor to the rejection and crucifixion of Jesus.

While these criticisms of “Son of God” may be stylish in nature, the scriptural inaccuracies are substantive and point to the decision of the filmmakers to put the needs of script over the accuracy of scripture. Why did the film show Jesus entering the tomb of Lazarus and kiss his forehead to raise him rather than depict Jesus standing outside the tomb calling for him to come out? Why was Lazarus not wrapped in burial strips and his face not covered? Why was Jesus shown standing, rather than kneeling and writing in the dirt, when presented with the woman accused of adultery? Why was Thomas shown to be in the upper room when Jesus first appeared, rather than outside, and still have doubt? Most importantly, Why did the film depict Peter fully understanding, without the benefit of revelation from Jesus, the nature of the resurrection, and explaining the risen Jesus through the breaking of the bread in the upper room? Had the filmmakers wanted to introduce the Eucharist as a means of recognizing and experiencing the risen Jesus, why did they not depict the powerful Emmaus narrative, where Jesus revealed himself through the breaking of the bread?

Such scriptural differences may seem unimportant, but in scripture, each of these details has meaning and purpose in revealing God and the Kingdom. These alterations of scripture reflect the determination by the film’s producers, and apparently pastoral advisors, that the scriptural narrative was dramatically lacking, and the use of such alterations place the needs of the script, to drive the drama, above the teaching purpose of scripture. Such decisions are more disappointing given that a major purpose for making the film was to reach out to persons unfamiliar with Jesus and the Gospel. These inaccuracies are now a part of their knowledge base and misunderstanding of the life and story of Jesus. As the film community is entering a new era faith or Biblical films, faith-based filmmakers who desire to film Biblical narratives should remember, to truly impact and contribute in the Kingdom, when drama or legend contradict scripture, film the scripture.

I am a United Methodist minister and my professional passion is connecting issues of life and faith to film and other artforms. I am also interested in autism awareness and ministry and special needs. I am married to Michelle and have two children.
View all posts by revkennydickson →
This entry was posted in Faith Shots, Film Shots and tagged "Son of God" film, Christology, faith and film, Gospel of John, jesus, Son of God. Bookmark the permalink.