Sermon Notes: With the Dawn of Redeeming Grace

Posted on December 25, 2013 by revkennydickson

Tonight concludes the Advent sermon series, “Repeat Sounding the Joy, “where we have looked closely at the theological teaching in favored Christmas carols. The first Sunday in Advent we looked at the theme of expectation as taught by Charles Wesley in his Advent hymn “Come Thou Long Expected Jesus.” The second Sunday “O Little Town of Bethlehem” presented the humility of the incarnation of God in Jesus, born to a simple family in modest town. Likewise, we were also called humbly receive Him into our hearts via a meek spirit. The third Sunday we studied “O Come All Ye Faithful” and “Hark The Herald Angels Sing” which both decidedly proclaim the full divinity of Jesus even as he was fully human. The last Sunday “Joy to the World” reminded us that we are to repeat the sounding joy of the birth of Jesus and the Gospel of grace and life. 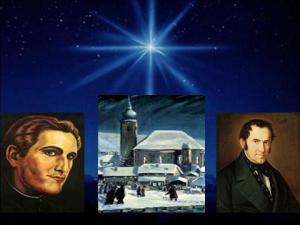 Tonight we conclude with the most popular and famous Christmas Carol, “Silent Night.” Tonight is the 195th anniversary of the first time it was used in worship. The verses were written as a poem in 1816 by Fr. Josef Mohr, an Austrian priest. On December 23rd 1818 Fr. Mohr asked Franz Gruber, the organist at St. Nicholas, the church he served as assistant priest, if he would compose a tune for the poem that they could use in worship the next day. “Silent Night” was first used in worship on Christmas Eve 1818 at St. Nicholas in the Austrian town of Oberndorf. In 1863 American Episcopal priest, Fr. John Freeman Young translated to hymn from German into English and it is this translation that most know as “Silent Night.”

The verse I want to consider is the third verse and the line “with the dawn of redeeming grace.” The birth of Jesus ushers in the dawn of redemption. Now I am no physicist, and I don’t play one on TV or in the pulpit, but as best as I know, dawn is defined as 18 degrees below horizon, before twilight which is the time just before the sun breaks above the horizon and officially rises. I describe dawn as a “weakening of darkness,” where you don’t see rays of light, but notice that the darkness is fading.

The birth of Christ was the dawn of redemption, which is grace, and the initiation of the Kingdom of God. Though such redemption and planting of the Kingdom is, as with dawn, beyond vision, it is perceptible, more felt than seen. Yet, redeeming grace and the Kingdom of God, as with the sunrise, is inevitable and unstoppable. Grace, given undeservedly, restores us to relationship with God, by restoring us to our state as created, the image and likeness of God.

As tonight is the 195th anniversary of the first singing of “Silent Night,”45 years ago tonight Frank Borman, Jim Lovell, Bill Anders, were 238,000 miles from the earth and 60 nautical miles from the lunar surface in their Apollo 8 capsule. During the third orbit, after rotating the position of the spacecraft so that their windows faced the lunar surface, they became the first humans to see the moon up close and personal. They began working on one of their mission objectives, taking high resolution photographs of the lunar surface in preparation for the Apollo 11 lunar landing 8 months later.

While they were working something caught Bill Anders eye as he looked out the Apollo 8 window. When he turned to look, he became the first person to see the earth from another celestial body as he saw the earth rise over the lunar horizon. Both Anders and Jim Lovell worked hard to find a camera with color film to capture the moment.

The film and picture of the earth rising above the lunar horizon show the earth as small and floating delicately in the vastness of space. “Earth Rising” became one of the most famous and published photos ever. For those at home,”Earth Rising” became a reminder of the beauty of the earth in the midst of an ugly, tumultuous time, 1968, a tragic year of war, and social conflict, a year of assassinations resulting in the loss of hope and a dream.

Striking was the contrast between the vast, utter desolation of the moon and the delicate beauty of the earth. Jim Lovell described the earth “as a grand oasis in the vastness of space.”

What this image did for much of the world in 1968, grace does for us, allows us to see things from a different, true perspective. Grace allows us to see, allows us to again be, God’s grand creation , even as we exist in, and at times perpetuate the vast desolation of sin.

Christmas gives us perspective and time. In living life, we are too often too busy to notice the beauty not only around us, but in us, that is us. Or, when we are going through desolate times in our lives, when life seems as dead or unfulfilling as the lunar desolation, we are reminded of the reality of our existence in Christ. We see ourselves as God sees us, as God created us and, through Christ, as God redeems us to be again. As we once again look toward the dawn that is God’s incarnation in Christ Jesus, may we receive, accept and embrace God’s redeeming Grace.

I am a United Methodist minister and my professional passion is connecting issues of life and faith to film and other artforms. I am also interested in autism awareness and ministry and special needs. I am married to Michelle and have two children.
View all posts by revkennydickson →
This entry was posted in Faith Shots, Sermons and tagged Apollo 8, Christ United Methodist Church Farmers Branch texas, Christmas, Christmas Eve, Christmas Eve Sermon, forgiveness, grace, James Lovell, jesus, Josef Mohr, Luke 2, new creation., redemption, Silent night. Bookmark the permalink.