Confessions From the Dark Piece of the Puzzle

Posted on December 14, 2012 by revkennydickson 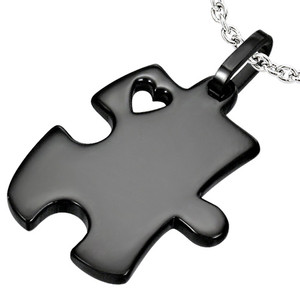 The symbol for autism awareness is the jigsaw puzzle and specificaly brightly colored puzzle pieces.  This is an appropriate symbol because, in the grand scheme, that is what living through autism is like, putting individual pieces together.  Whether it is the pieces of diagnosis, overcoming limitations, or just managing to get through the day, the picture of autism is made up of many pieces.  While this is an appropriate symbol, what is missing is the frustrations and challenge that comes when large, complex puzzles are attempted.  Not all the pieces in the autism puzzle are brightly colored. There are darker pieces, challenging time, that are a part of the puzzle, part of parenting in the twilight zone puzzle that is the autism spectrum.

In putting together two 3000 piece puzzles, I found out I can only do it in short bursts before I get frustrated and have to get away. In putting the puzzle of autism together you can’t just get up and leave it for a while. Like everything with this condition, and in many ways parenting in general, respite must be planned, and one never really gets away.

One of the most common and long lasting effects of this condition is grief. For families with severely impacted children, grief is the piece that invariably gets lost and is never to be placed or covered.  I guess I came to the realization that the window to grief and pain is one that can open at any time.  Even as it has been 10 years since the diagnosis of our daughter’s autism, 10 years since we haltingly yahoo’d the words “autism symptoms” then “autism treatments,” there are still periods where the pain of loss since the diagnosis are as fresh as they were a decade ago.  There are also painfilled times when the memories or images of the early, happier days before autism (BA) blitz into my consciousness and wreak havoc upon my spirit and day.

I have learned the triggers, usually seeing preschoolers doing preschooler things, but it is only occasionally.  One time I was serving communion when a father led his 3ish daughter to the rail, taught her how to kneel, fold her hands in prayer, take a piece of the bread and one of the juice cups. Two other times when I felt blitzed by the grief were when I was participating in services when a 3rd grader received her Bible and when a 6th grader was confirmed.  The girls reminded me in some way, their look or mannerisms, of my daughter and that I would not have this experience, at least not in this way.  The genesis of this blog was watching a preschool boy become unhappy and showing this by flopping on the ground, just as my daughter did/does.  This Grief Blitz strikes from out of nowhere, and hits my spirit like an unexpected kick to the stomach.  It is these unexpected, out of left field shots that send my spirit staggering into the ropes.

It is not so bad when shot is expected, and, like a hit to the stomach, when I can see it coming I can tighten my spiritual muscles and absorb the blows and protect the core of my spirit.  I have long learned to do this at weddings.  The day my daughter was born, I remember having a flash image the first time she locked hold of my index finger with her hand, of her holding my finger when I walked her down the aisle on her wedding day.  Now, whenever I preside at weddings I steel myself and focus my attention elsewhere, usually watching the groom watch his bride approach.

The grief I experience is similar, from what I have been told by parents, to loosing a child to death.   There is the wondering what they would be like at each age.  There are the milestone events that they are not participating in, graduations, marriages, starting careers, having their own children and the like. Those parents have lost their child and the dreams that come with children.  We have lost the dreams we had when we expected and thought we had a “neuro-typical child.  We have lost our dreams but we still have our child. Some with low functioning children say that this is harder than the grief and loss of a child through death.  I do not make that claim.  I would suspect that most of the parents who have lost children to death would make that trade.  We still have our daughter and she brings joy and laughter to our lives, but, there are challenges that death removes when a child dies yet remain in children with severe disabilities.

While we are dealing with the loss of the dreams, we also often have to deal with the reality of her cognitive deficits.  Like the grief that can blitz me at any moment, so can her tantrums which include screaming, head-banging, hitting herself in the face, and biting her arm.  We have generally learned what can set her off and we try to avoid those things or events, but we can’t always and we don’t always have clues. During these times I have wondered, asked angrily in my mind and prayers, isn’t what we have lost, what we have given up enough?  Isn’t it enough that she will never be able to live on her own, that she will never experience sleepover, giggling on the phone, romantic love, marriage, or holding her own child? Now she has to experience bursts of frustrations that lead to injurious behavior, and then feel the consequences of that.  Now we have to experience that as well. Sometimes these episodes serve to rip off the scab, or reopen the wounds and loss that come with autism.

Autism isn’t the only condition that is hard to get through.  It may or might not be the hardest.  Whether it is autism, downs, cancer, bi-polar, addictions, MD, MS, or a host of other diseases or disorders, everyone has something to deal with, and have times when dealing with it is harder than hard.  Don Imus when talking about autism and childhood cancer commented that nobody gets out unscathed.  The secret then becomes to become “strong at the broken places.” One way one gets strong in the midst of brokenness is to notice the blessings that come in life but are often overlooked in the fast paced, bright light life of normalcy.

While autism has robbed our lives of many hopes, dreams, and happy occasions, we will never suffer from underappreciating little successes or minor achievements.  There is a saying, made up obviously by a tightwad accountant, “if you count the pennies, the dollars take care of themselves.”  When you are not chasing or demanding monumental achievements, you savor what others overlook.  For us a smile, eye-contact, a warm hug, a laugh, a spontaneous 4 word request or sentence, are like making an A+, the first team or first chair. For us perfect is never the enemy of the good.

Like many things in life, autism is a journey, or a part of the greater journey that is life.  Though I sometimes forget them, I have learned somethings along the autism odyssey. The secret to  controlling or, when necessary, shutting the windows that let in the blitz of grief, is to accept that happiness should not be relative, live in the moments of blessings one has, do not live in the fear the unknown future may hold, and never stop working the pieces even when some are missing.

I am a United Methodist minister and my professional passion is connecting issues of life and faith to film and other artforms. I am also interested in autism awareness and ministry and special needs. I am married to Michelle and have two children.
View all posts by revkennydickson →
This entry was posted in Scattershooting and tagged autism, autism puzzle piece, autism spectrum, don Imus, grief, grief attack, loss, parents, respite, Special Needs, special needs challenges, special needs parents. Bookmark the permalink.

4 Responses to Confessions From the Dark Piece of the Puzzle